Cannabinoids: What is the Difference Between CBD, CBG, CBN & CBC 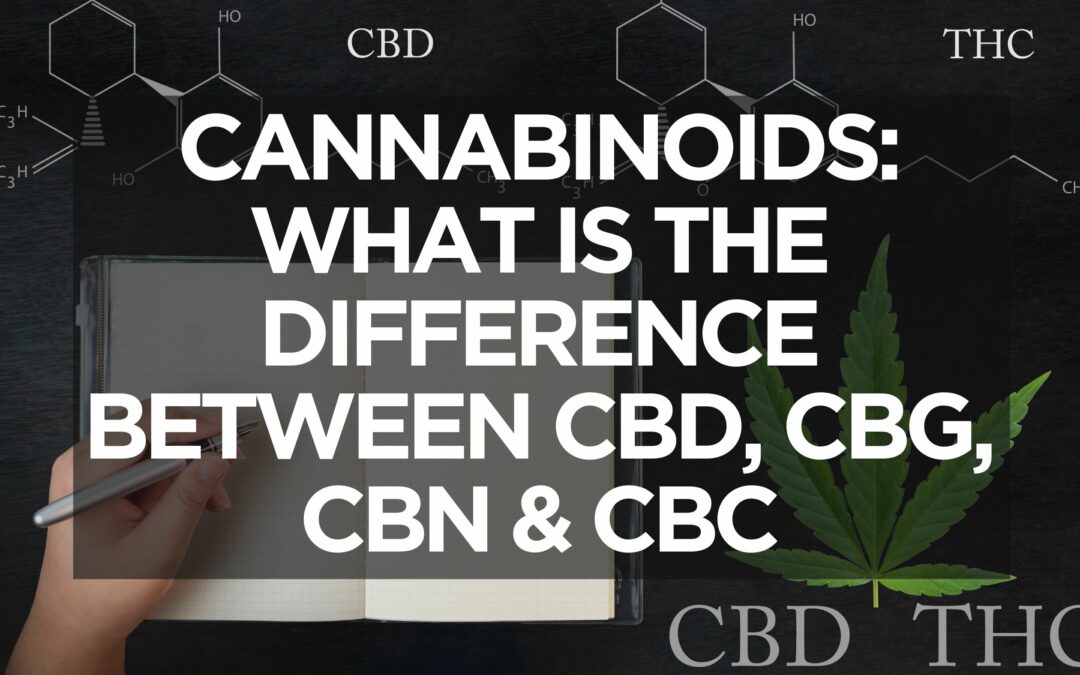 THC and CBD are the two most popular cannabinoids on the market. You may have noticed that there is an emergence of lesser-known cannabinoids tagging along with them. Ever since the 2018 Farm Bill legalized the cultivation of hemp and its derivative substances, many other cannabinoids became more prevalent.

We all know cannabidiol (CBD) as the leading active ingredient in medical marijuana. CBD products have been around for multiple years. As more research and consumer experience bring to light the medical benefits of cannabinoids, we now see other cannabis products on the shelves of dispensaries.

The other cannabinoids that are gaining worldwide attention include cannabigerol (CBG), cannabinol (CBN), and cannabichromene (CBC). These compounds are showing promising results in the medical marijuana industry. They provide health benefits without the intoxicating effect commonly associated with tetrahydrocannabinolic acid (THCa) and its derivative tetrahydrocannabinol (THC).

As consumers, it is vital to learn about these emerging cannabinoids before deciding to purchase them. In this article, we will discuss these four precious compounds, discover more about them, and how they differ from one another. We will also discuss their therapeutic effects and psychoactive effects if any.

For the last few years, the cannabinoid CBD has become widespread due to its ability to reduce discomfort and relieve inflammatory conditions. It is beneficial for medical use because it does not have psychoactive effects, unlike delta-9 THC.

CBD occurs naturally in cannabis and is the next most popular cannabinoid after THC. It is also the second most abundant substance in the cannabis plant. Therefore, it is easy to produce and a lot cheaper than other lesser-known cannabinoids, as a result.

When you visit weed dispensaries, you can find CBD products in various forms like gummies, tinctures, oils, concentrates, pills, and so much more. Due to its non-psychotropic nature, it is best suited for its health and wellness applications. It is non-addictive and less likely to become an abused substance.

As of today, the Food and Drug Administration (FDA) classifies CBD as a dietary supplement that is not intended to treat or cure any disease. However, it is also used as an active ingredient in FDA-approved pharmaceuticals like Epidolex, a drug used to treat epilepsy.

CBD was discovered back in 1940 by a team of scientists headed by Dr. Roger Adams at the University of Illinois. Since its discovery, further research on the cannabinoid has been conducted, especially on its interaction and effects on the endocannabinoid system.

Some of the health benefits of CBD cannabidiol according to preliminary clinical trials and consumer reports include the following:

CBN is the first cannabinoid to be discovered by the British chemist Robert Sidney Conn in 1930. Unlike other cannabinoids that are produced naturally in the cannabis plant, CBN is a byproduct of the degradation of THC. As THC is exposed to heat or direct sunlight, it oxidizes and forms CBN.

CBN cannabinol is available only in trace amounts in fresh Cannabis Sativa. As the harvested plant dries and ages, it produces more of the compound. Most recreational cannabis users prefer not to have CBN in their marijuana products. Having CBN in marijuana products means it is already old and stale.

As a by-product of THC oxidation, CBN has some mild intoxicating effects. However, it is only around 25% or less as potent as THC. When it reaches the endocannabinoid system, CBN binds less effectively to the cannabinoid receptors. Hence, it does not fully deactivate them.

It may still cause a mild high if taken in substantial amounts. However, since most broad-spectrum products contain only a little amount of CBN, it may not be enough to cause a distinguishable high.

Some of the potential benefits of taking CBN include the following:

CBG is a derivative of cannabigerolic acid (CBGa), the mother of all cannabinoids. Major cannabinoids like THC, CBD, and CBG all started as CBGa. As soon as CBGa gets exposed to heat, sunlight, and oxygen, it transforms into any of the other cannabinoids.

CBG is present in minute amounts in cannabis plants, usually lower than 1%. Therefore, it has to be extracted carefully to produce CBG isolate, which is more expensive than other cannabinoids because of its rarity. Despite its price, it is in demand on the market because of its potential medicinal benefits.

CBG was discovered in 1964 by scientists Raphael Mechoulam and Yehiel Gaoni as they were working with hashish. Eventually, researchers found that CBGa is the first form the cannabinoids take in young cannabis plants.

Some of the possible medicinal benefits of CBG include the following:

CBC is a vital cannabinoid that is not as prevalent as THC and CBD. However, it may soon become a household name due to its many medicinal properties.

CBC is a derivative of cannabidiolic acid (CBCa) as a result of its exposure to ultraviolet light or heat. It is the third most abundant cannabinoid in most cannabis strains, aside from THC and CBD. It can be found in much higher levels in landrace strains. In some strains, it may even be more abundant than CBD.

CBC was discovered by Mechoulam and Gaoini in 1966. There is little preliminary research on CBC as major studies focused mainly on CBD and THC.

CBC is one of the non-psychotropic substances in the cannabinoid family. CBC starts as cannabidiolic acid, also a non-psychoactive cannabinoid.

CBC works well when combined with other cannabinoids and terpenes. Together, they create an entourage effect. Although this is still a theory, combining cannabis compounds may magnify the properties of each substance.

CBC also shares the molecular formula of CBD and THC. However, they have different chemical properties.

The potential medicinal benefits of CBC include the following:

Which Cannabinoid Should You Use?

Choosing the right type of cannabinoid to use may prove difficult if you are not aware of its potential benefits. By reading this article piece, you now have a good grasp of what each cannabinoid can do.

Before you choose which cannabinoids to use, determine what medical conditions you have. Do you suffer from chronic pain, inflammatory skin conditions, anxiety, or depression? If so, CBD may be the best cannabinoid to take.

If you are suffering from sleep-related disorders, CBN may be the best sleeping aid to take. It has strong sedating properties that can help you achieve better sleep cycles without causing any negative side effects. Although over-the-counter sleep medications can sedate you, they may not be as effective as CBN.

Broad-spectrum CBD products usually contain CBG, CBN, or CBC as well. Hence, you may get the potential benefits of all these cannabinoids in one product.

If you want to learn more, CBN and CBD difference is also covered in this blog.

A cannabinoid can either turn on or turn off the receptors to regulate appetite, sleep, pain, and even emotions. The effect of the cannabinoid on these receptors determines its therapeutic effects as well. We can talk about these effects in full length but that would be going beyond the scope of this article.

Other Cannabinoids in Cannabis Plants to Consider

Delta 9 THC is usually referred to as plain THC. If you read THC on the label of a product, it refers to Delta 9. It is the most prevalent cannabinoid because of its psychoactive effect. When you smoke marijuana and get high, it is because of this compound.

THC is not only psychoactive, though. It also has various benefits for the mind and body. It can increase appetite, reduce inflammation, reduce pain, enhance sleep, and others. However, it may not be best for medical use because of its intoxicating high.

Be careful when taking too much THC because it can cause anxiety and paranoia. Be sure to keep your dose in control. If it is your first time taking the substance, test your body with a small amount to determine your tolerance level.

Delta 8 THC is usually derived from CBD. Hence, it is considered legal in many states, except in those that expressly prohibit its sale and use. If you live in an area where THC is prohibited, then Delta 8 THC may be the best alternative if you want to get high.

Delta 8, despite being derived from CBD, has psychoactive effects. However, it is half as potent as Delta 9. Hence, you have to take twice as much Delta 8 to achieve the same potency as Delta 9.

According to many user experiences, Delta 8 produces a better euphoric high than Delta 9. The high is much clearer and calmer. It does not cause anxiety and paranoia, as well. For these reasons, some people in areas where THC is legal still prefer to take Delta 8.

THCV is a cannabinoid with unique properties. In large doses, it can mimic the high you can get from THC. Anecdotal evidence suggests that the high is a lot calmer and more euphoric. It does not induce anxiety or stress.

THCV is popular because of its appetite-suppressing effects. When you take THC, you usually experience munchies, an uncontrollable urge to eat a lot of food. With THCV, you get high but you do not get hungry. Therefore, it is usually called the “diet weed.”

Make sure that you consult with your doctor before taking any cannabis product., especially if you have a serious medical condition or are under prescription medication. Cannabinoids may react with your existing medication and cause a delay in your recovery.

Cannabis compounds provide a wide range of benefits. While CBD is the most prevalent among the four cannabinoids discussed in this article, it is also worth experimenting with other cannabinoids. Just be sure to consult medical professionals before trying them out.

For the best CBD tincture, pills, and other related products, check out our CBD products list. Remember to shop wisely and act responsibly when under the influence of cannabis. Always stay calm and happy!